The figures reflected by the current epidemiology of cardiovascular disease still make acute myocardial infarction (AMI) the leading healthcare issue around the world (1). Although many progresses have been made during the past decades, the diagnostic approach to this condition remains somehow challenging (2). The development and recent commercialization of the so-called high-sensitivity (HS) cardiac troponin (cTn) immunoassays has represented another essential step forward toward a better characterization of patients with suspected AMI, especially in short stay units such as the emergency department (ED) (3). The considerably improved analytical sensibility of these techniques now allows measuring so little amounts of cTn that were virtually inconceivable 10 years ago. In clinical practice, this enhanced analytical performance is mirrored by the possibility to identify negligible myocardial injuries (i.e., micrograms of damaged myocardial tissue), such as those often observed after practicing endurance sports (4).

Albeit HS immunoassays should hence be seen as an appealing perspective for improved patient management in the ED, doubts remains as to whether these assays are really cost-effective, or else if their practical advantages will convincingly overwhelm some potential practical drawbacks, which mainly emerge from the challenge of clearly identifying the source of measurable cTn in all patients presenting to the ED with a kaleidoscope of differential diagnoses other than myocardial ischemia (5,6). To overcome this issue, many diagnostic algorithms have been proposed, most of which based on a dichotomous approach, i.e., early rule-out of AMI in patients whose cTn values are below a very low cut-off value (usually corresponding to the limit of detection of the assay), combined with rule-in of AMI in those with 1 to 3 hours cTn kinetics suggestive of ongoing myocardial damage (7,8).

Quite recently, some interesting studies showed that implementation of HS cTn immunoassays for management of patients in the ED was associated with many practical and organizational advantages, including increased discharge rate, decrease length of ED stay, lower exposure to diagnostic radiation and, finally, reduced overall costs of care in the ED (9,10). Whether these benefits, mostly appreciated by clinicians and hospital administrators, will then translate into clinical advantage for patients remains a debated matter, as recently highlighted by Sandoval et al., who showed that both an innovative HS and the former contemporary-sensitive (CS) cardiac troponin I (cTnI) immunoassays are capable to provide efficient rule out of AMI when used within protocols entailing serial testing and electrocardiogram data (11).

Therefore, this study was designed to verify whether the practical advantages of a HS cTnI immunoassay may also be mirrored by a more efficient diagnostic performance, expressed as lower chance of patient misclassification upon ED admission.

The study population consisted of 57 consecutive patients admitted to the ED of the University Hospital of Parma (Italy) with suspected AMI. The University Hospital of Parma is a 1,150-bed, tertiary academic referral facility, whose ED averages nearly 90,000 visits per year. A blood sample for cTnI assessment was collected immediately upon patient presentation to the ED, and the diagnosis of AMI was made according to the third universal definition of myocardial infarction (12). The value of cTnI was measured with both a CS immunoassay (Beckman Coulter AccuTnI+3; Beckman Coulter, Brea, Ca, USA) and the novel HS method (Beckman Coulter hsTnI), on Beckman Coulter DxI (Beckman Coulter). The specific analytical characteristics of these assays have been previously described elsewhere (13,14).

The best cut-off for diagnosing AMI was derived from receiver operating characteristic (ROC) curves, calculation of the area under the curve (AUC), and selection of cTnI values characterized by the best diagnostic sensitivity (i.e., 1.00). The imprecision at the assay-specific diagnostic cut-off was calculated for both the CS and HS cTnI immunoassays by measuring scalar dilutions of a sample with high cTnI value, which was serially diluted with sample buffer until reaching a virtually unmeasurable cTnI value (i.e., below the limit of detection of the methods). All dilutions were tested in 10 consecutive runs and the imprecision was estimated for each dilution as coefficient of variation (CV%). A model fit was then constructed to extrapolate imprecision at the optimal diagnostic cut-off previously selected for both cTnI immunoassays from ROC curve analysis. The potential impact on patient misclassification (i.e., the sum of potential false positive and false negative results, expressed as a percentage of all patients) was finally estimated according to data previously published by Sheehan et al. (15). The study protocol was conducted in accordance with the Helsinki Declaration of 1964 (revised 2008), according to the terms of relevant local legislation, and was cleared by the institutional review board of the University Hospital of Parma. No ethical approval or patient’s consent were deemed necessary, since the study was based on pre-existing samples, no additional measurements were performed, and results did not affect the clinical management of the patients.

A final diagnosis of AMI according to the third universal definition of myocardial infarction (12) could be made in 9/57 (i.e., 16%) patients. The results of ROC curve analysis are shown in Figure 1. The AUC was not significantly different for cTnI measured with either the CS or the HS immunoassays (0.89 vs. 0.90; P=0.393). The best diagnostic cut-offs were 20 ng/L (1.00 sensitivity and 0.67 specificity) for CS cTnI and 18 ng/L (1.00 sensitivity and 0.67 specificity) for HS cTnI, respectively. The results of assay imprecision at the two diagnostic cut-offs for CS and HS immunoassays is shown in Figure 2, being 22.0% at 20 ng/L for the CS cTnI immunoassay and 3.4% at 18 ng/L for the HS cTnI immunoassay, respectively. 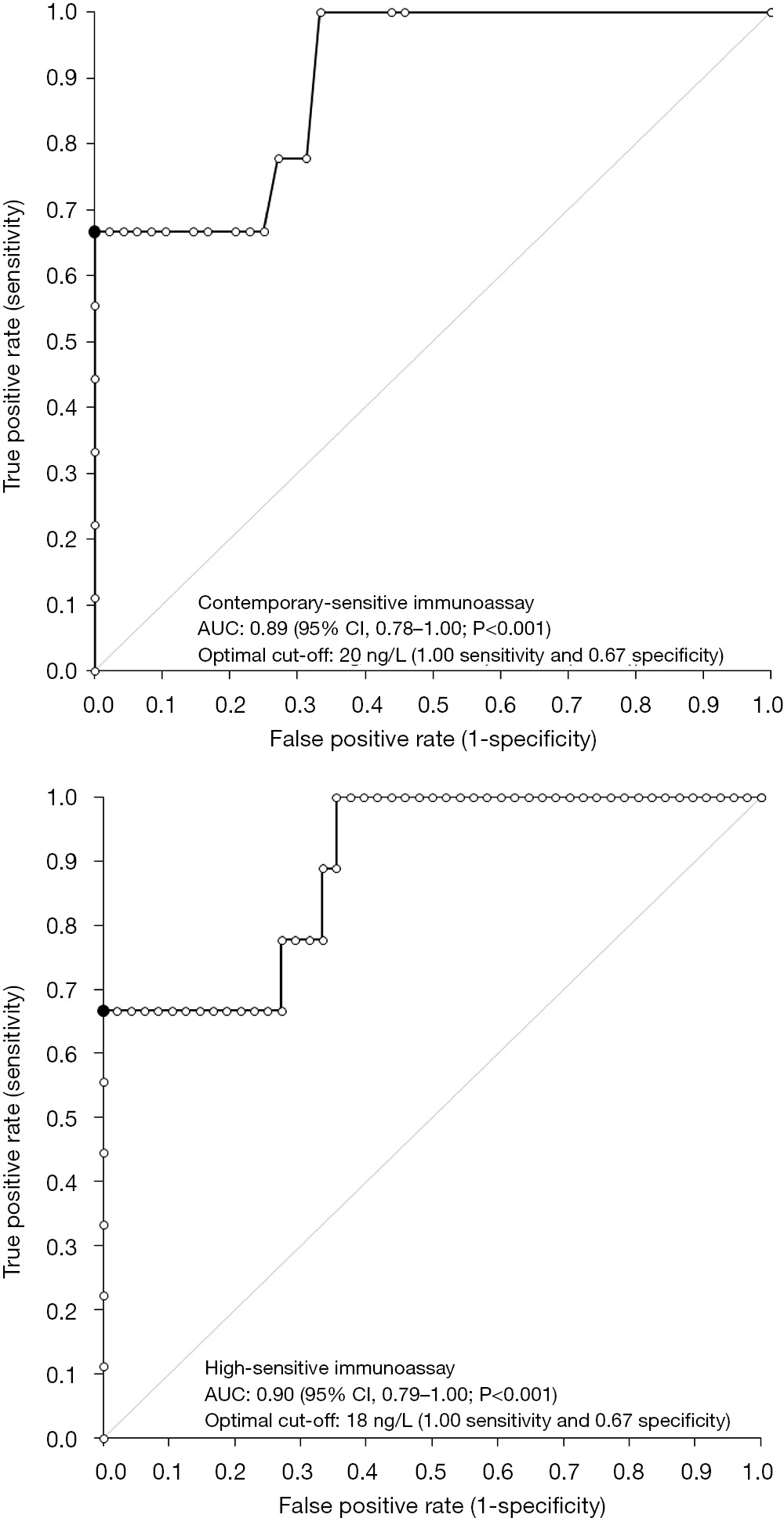 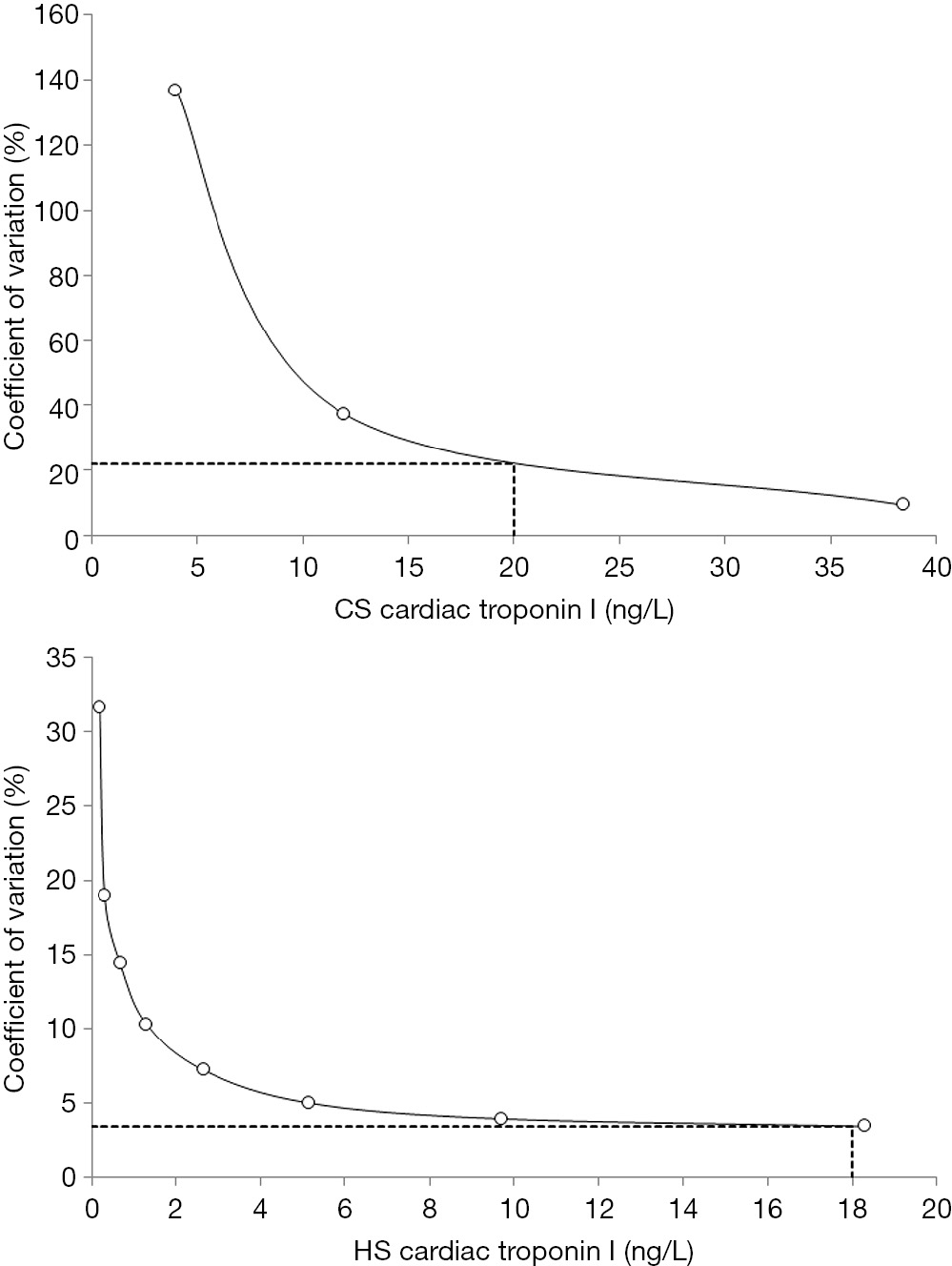 Figure 2 Calculation of the imprecision (coefficient of variation, CV%) at assay-specific diagnostic cut-off offs a contemporary-sensitive (CS) and a high-sensitive (HS) cardiac troponin I (cTnI) immunoassays. 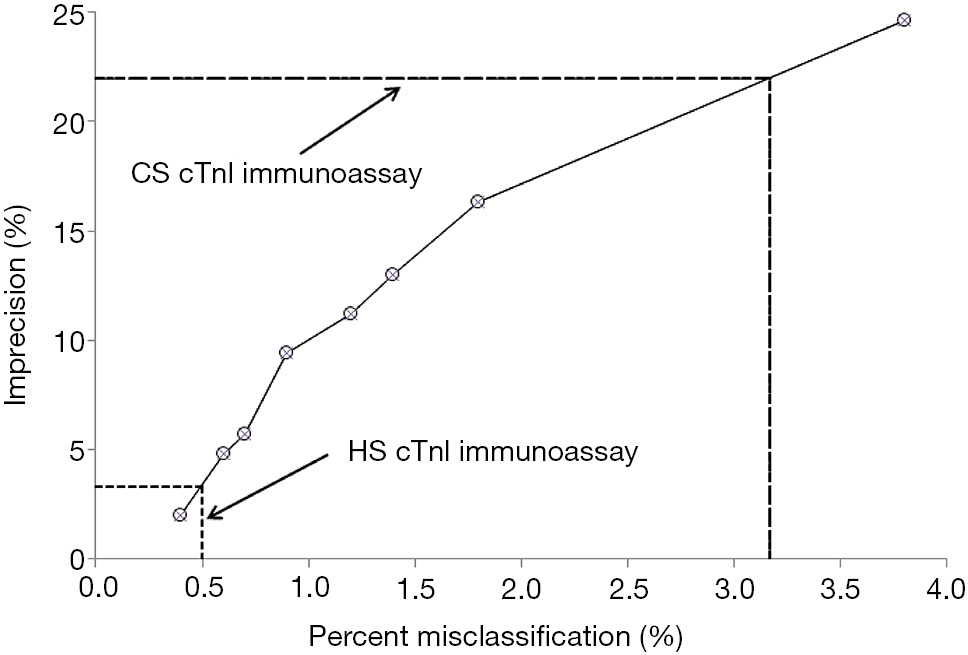 Figure 3 Chance of misclassification of patients admitted to the emergency department with suspected acute myocardial infarction using a contemporary-sensitive (CS) or a high-sensitive (HS) cardiac troponin I (cTnI) immunoassay.

Although it seems now reasonable to conclude that the use of HS cTn immunoassays may generate a vast array of practical and economic benefits for accurate and timely management of patients admitted to the ED with suspected AMI (16), the demonstration of major clinical advantages over conventional CS techniques remain somewhat elusive (11,17,18).

According to the results of our investigation, the largest improvement obtained by replacing a CS cTnI immunoassay with a more recent HS cTnI technique commercialized by the same manufacturer was not actually seen in terms of overall improved diagnostic performance, since the AUC and the values of sensitivity and specificity were very similar between the CS and HS cTnI immunoassays (Figure 1). Nevertheless, when we calculated the imprecision corresponding to the assay-specific diagnostic thresholds, the new HS cTnI immunoassay displayed a CV that was approximately 6-fold lower than that of the CS technique (i.e., 3.4% vs. 22.0%) (Figure 2). Translating these figures into the risk of patient misclassification at ED admission, the use of the HS cTnI immunoassay was hence associated with a more than 6-fold lower risk of misclassifying patients (i.e., 0.5% vs. 3.2%) (Figure 3). Taken together, this data attests that the accuracy of diagnosing AMI may be certainly improved by replacing CS cTnI techniques with HS cTnI immunoassays, especially in the subset of patients displaying admission values close to the diagnostic cut-off calculated from ROC curve analysis. This is especially important in view of the meaningful number of “early presenters”, i.e., patients presenting to the ED within 2 hours from symptoms onset and with cTnI values still laying in the so-called “grey zone” (i.e., slightly lower or slightly higher cTnI concentrations than the diagnostic threshold), in whom AMI cannot be safely ruled out or diagnosed without serial measurement, with the second sample collected from 1 to 3 hours afterwards. In these patients, representing approximately 15% of all those admitted to the ED with suspected AMI (19), the risk of unsafe discharge or unjustified stay in the ED due to assay imprecision was found to be decreased by over 6-fold in our study, thus possibly leading to improved clinical outcomes and less inconvenience.

The major diagnostic accuracy, combined with recent data showing that the introduction of HS cTnI immunoassays may improve ED efficiency and decrease overall costs in the emergency room, represents an additional aspect in favor of introducing HS techniques for more timely and accurate management of patients admitted to the ED with suspected AMI, especially those displaying non-diagnostic cTnI values at presentation.

Ethical Statement: No ethical approval or patient’s consent were deemed necessary, since the study was based on pre-existing samples, no additional measurements were performed, and results did not affect the clinical management of the patients.