The erythrocyte sedimentation rate (ESR), also less frequently known as “length of sedimentation reaction in blood” (LSRB), is used as non-specific index for assessing acute phase response in patients with many inflammatory diseases (1). Firstly, described by Edmund Biernacki in 1894, and immediately afterwards by Hirszfeld, Fåhraeus and Westergren, the ESR is a clinically valuable test for monitoring a kaleidoscope of inflammatory conditions, and is still the mainstay for diagnosis and staging giant cell arteritis and polymyalgia rheumatica (2).

According to the International Council for Standardization in Hematology (ICSH), the Westergren method is the reference technique for measuring ESR, and shall be performed using blood diluted with trisodium citrate dihydrate (3). Although the ESR assay has been originally validated on whole blood anticoagulated with sodium citrate, the use of whole blood anticoagulated with dipotassium ethylenediaminetetraacetic acid (K2EDTA) has now been endorsed by the ICSH, thus becoming commonplace for many practical and technical reasons. After the 2001, several new automated or semi-automated methods have become available for ESR assessment, based on new technical innovations (i.e., shorter testing times, used of capped blood tubes, availability of quality control and proficiency testing). All these analyzers can now use blood anticoagulated with either EDTA or sodium citrate (2).

The validation of alternative blood sample matrices when the reference material is unavailable (i.e., for undue clotting of whole blood specimens, blood drawing in wrong containers, insufficient volume and so forth) is now a well-established practice in laboratory medicine. More specifically, the new International Organization for Standardization (ISO) 15189 standard for accreditation of medical laboratories includes, among the various requisites, specific information on sample requirements (e.g., blood tube, additives), sample volume and other special precautions (4). This study was hence planned to define how ESR values would compare in paired whole blood samples, anticoagulated with either K2EDTA or sodium citrate.

A total number of 148 consecutive paired blood samples collected either in 3.5 mL, 3.2% trisodium citrate (Vacutest Kima, Padova, Italy) or 3.0 mL, 5.4 mg K2EDTA (Vacutest Kima, Padova, Italy) were randomly selected from all routine samples conveyed for coagulation and ESR testing to the local laboratory during a normal working day (mean age of the patients, 55±17 years; 73 women and 75 men). All specimens were collected under standardized conditions (early in the morning, after an overnight fast) and examined within less than 2 h from venipuncture, as for ICSH recommendations. The coagulation tubes used in this study contain 3.2% sodium citrate in a 1:9 ratio with blood. This blood to anticoagulant ratio was used since the routine samples are those that can be more conveniently used for routine coagulation testing, thus allowing to save a blood tube. The ESR was measured on all uncentrifuged samples, using the same fully automated analyzer TEST 1 (Alifax SpA, Polverara, Italy), which is based on capillary photometric-kinetic technology. Briefly, the system uses 150–175 µL of undiluted blood delivered into a capillary tube, where blood is accelerated via a “stopped-flow” circuit, causing erythrocytes aggregation. The measurement employs infrared ray microphotometer with light 950 nm wavelength and completes nearly 1,000 readings over a 20 s period. All these electrical impulses, captured by a photodiode detector, positively correlate with the extent of RBC aggregation in the capillary. A mathematical algorithm then transforms the raw measure of optical density into an ESR value, which is directly comparable to Westergren values. The throughput of the system is 180 tests per hour with continuous loading, thus providing a test result every ~20 s.

The ESR values obtained in K2EDTA and sodium citrate were compared with Passing and Bablok regression analysis and Spearman’s’ correlation, whilst the mean difference and its 95% confidence interval (95% CI) difference was calculated with Bland and Altman plots. The statistical analysis was carried out with Analyse-it (Analyse-it Software Ltd., Leeds, UK) and the statistical significance was set at P<0.05. The study was carried out using pre-existing samples, for which routine ESR assessment was already requested, so that patients’ informed consent was unnecessary. The study was approved by the Ethical Committee of the University Hospital of Verona (SOPAV2; July 25, 2016). 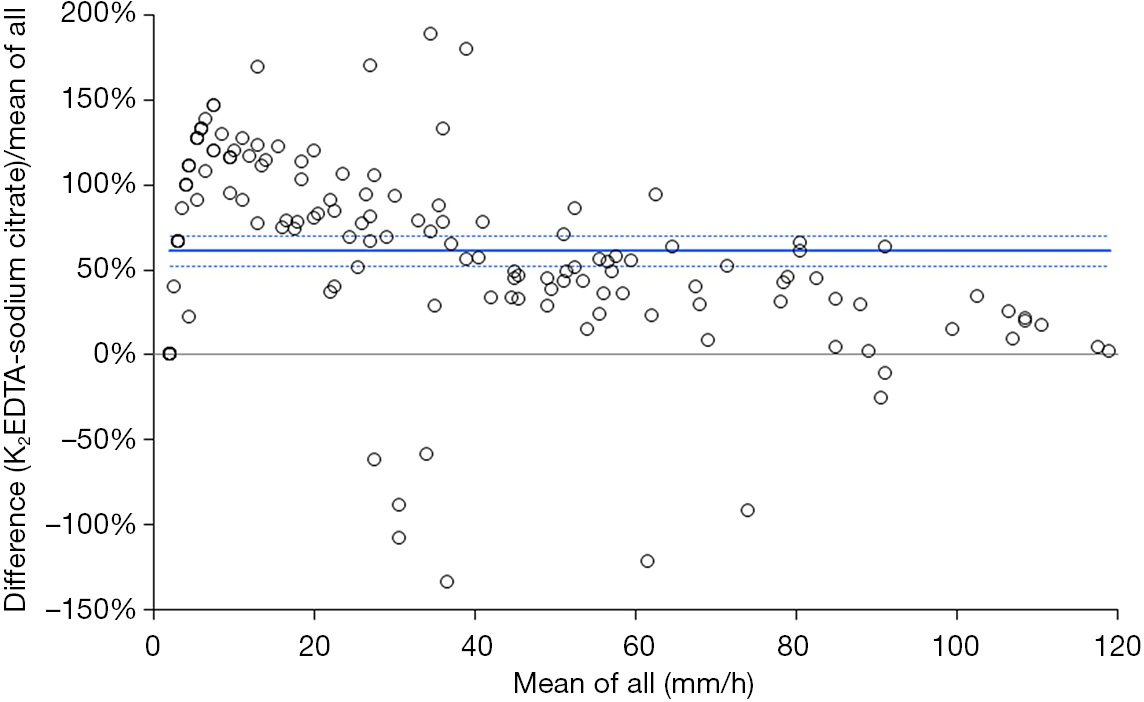 An accurate assessment of ESR shall be considered a necessary requisite for providing valuable medical information and safeguarding patient safety, since this test is still largely requested by many physicians worldwide. The identification of the most appropriate anticoagulant for measuring ESR has started many years ago. In the 1968 Gonyea and Benson put forward the concept that EDTA should be used instead of sodium citrate for a more accurate determination of ESR (5). In the 2010, however, the ICSH recommended that blood for ESR assessment can be drawn into EDTA (K3 or K2) (dilution <1%) or in sterile trisodium citrate dehydrate tubes (3), thus implicitly assuming that the two sample matrices may be equivalent. A seminal study published by Plebani et al. in 1998, which evaluated the analytical performance of TEST 1 system, emphasized that a significant difference exists in the reference values of ESR using blood samples anticoagulated with EDTA or sodium citrate (6). The results of our study using Alifax TEST 1, whose results were recently proven to be highly comparable to the reference Westergren assay (7), support earlier findings that ESR values are different in blood anticoagulated with K2EDTA or sodium citrate (8,9). In particular, Emelike et al. measured ESR in 200 samples collected in trisodium citrate, normal saline diluents or without any diluents (8), and found significantly lower ESR values in blood anticoagulated with trisodium citrate than in whole blood anticoagulated with EDTA (i.e., ~20% lower). In another study, Kumta et al. also measured ESR in 22 random subjects, whose blood was collected in sodium citrate and EDTA blood tubes (9). Also, in this experiment a significant difference could be found in ESR values obtained using the two different sample matrices. These results are hence in keeping with our findings, showing that ESR values are nearly half in blood anticoagulated with citrate than in K2EDTA blood (Figure 1). The ICSH criterion that 95% of the differences observed between alternative testing conditions should be ≤5 mm/h was also largely unfulfilled in our investigation. We can hence conclude that although both K2EDTA and citrate tubes can be currently used for measuring ESR, results are not interchangeable and specific reference ranges should be adopted for these two sample matrices. Beside the impact of many other important preanalytical variables (10), attention shall also be paid that coagulation tubes contain the same citrate concentration, since both 3.2% and 3.8% citrate tubes may still be available in certain countries (11). Notably, a large bias in ESR data may also be due to the lack of standardization in specimen preparation (e.g., diluted vs. undiluted), or can be attributed to different equipment and algorithms used for producing comparable results with the reference Westergren method. Therefore, the current ICSH guidelines would need to be updated accordingly.

Total quality assurance is a vast enterprise in laboratory diagnostics (12). We hence finally suggest that age- and gender-specific reference ranges shall be clearly defined by the manufacturer, and then verified in local laboratories, along with studies aimed at demonstrating the suitability of a given sample matrix and the assay used for specific patient populations.

Ethical Statement: The authors are accountable for all aspects of the work in ensuring that questions related to the accuracy or integrity of any part of the work are appropriately investigated and resolved. The study was approved by the Ethical Committee of University Hospital of Verona (SOPAV2; July 25, 2016).