Procalcitonin in acute infections: from the research laboratory to clinical impact—new perspectives of biomarker use

Why do we need biomarkers of acute infections? If we should use procalcitonin (PCT) as such a biomarker, which is the best way to use it?

Biomarkers of acute infection can be used to assist in diagnosis, risk stratification/prediction, treatment surveillance and adjustment of targeted therapy. A large body of evidence is available regarding biomarkers of acute infections. A PubMed search of “infection” and “biomarkers” currently (14th August 2019) results in ~46,000 hits and “sepsis” and “biomarkers” gives ~8,000 hits. This review does not attempt to cover all this, since the signal/noise ratio is not particularly high in this area. Rather, it aims to pinpoint some landmark findings, positive as well as negative, which have resulted in directly clinically applicable strategies for biomarker-guided management in acute infections.

Since the polypeptide, PCT is currently the most extensively studied biomarker of acute infections, and since multiple randomized controlled trials with PCT-guided therapy have been published, the evidence regarding this biomarker will be the main scope of this paper.

Many aspects of this biomarker have been uncovered during the past two decades. In the current review, we focus on (I) background for using PCT as a biomarker of acute infections and PCT biology, (II) PCT in sepsis diagnosis and in estimating the risk of bacteremia, (III) PCT for treatment guidance in acute infections in critically ill patients, (IV) PCT for antibiotic reduction in acute respiratory infections.

Figure 1 shows a proposed model for investigating a biomarker of acute infections regarding diagnosis, treatment guidance and prognosis. 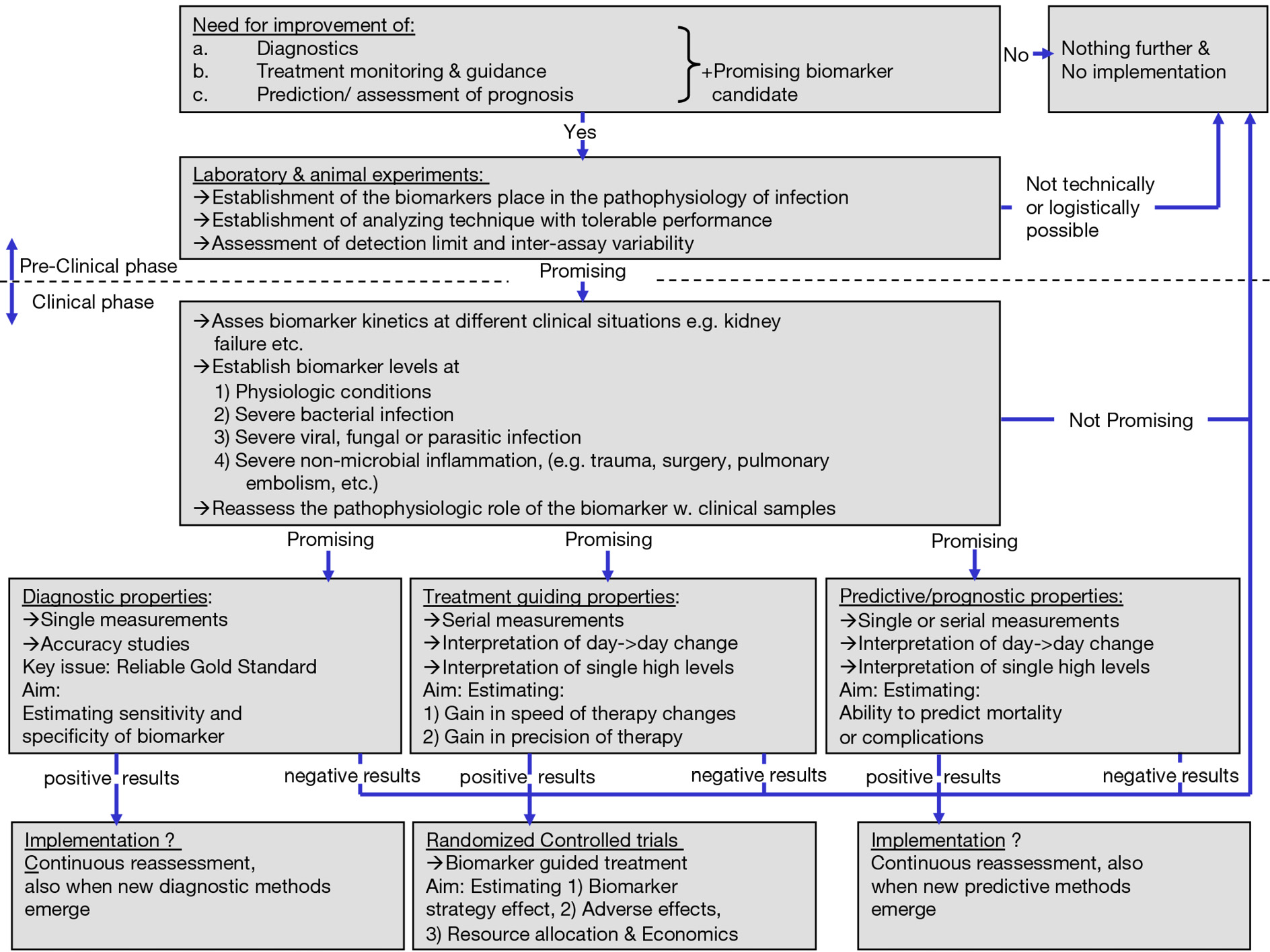 PCT (size approx. 12.6 kDa) is a 114 amino acid polypeptide prohormone of the calcium homeostasis hormone, calcitonin (1). Calcitonin is produced in the C-cells of the thyroid, which embryologically derive from the neural crest (2). PCT produced in the C-cells undergoes posttranslational processing, leading to release of the mature, bioactive calcitonin hormone of 32 amino acids. In 1983, a study group using a non-selective calcitonin assay, showed increased levels of immuno-reactive calcitonin in staphylococcal toxic shock syndrome, by gel-filtration demonstrating a large molecule, now known to be approximately the size of PCT (3).

In animal studies, PCT and other precursors of calcitonin have been isolated in the following tissues: Adrenal gland, spleen, spinal cord, brain, liver, pancreas, colon, lung, fat tissue, testes, and stomach (4). In bacterial sepsis, the mRNA of the calcitonin (CALC)-1 gene is up-regulated more uniformly than the mRNA of other inflammatory cytokines, such as tumor necrosis factor-α (TNF-α), interleukin-1-β (IL-1β) and Interleukin-6 (IL-6) as summarized by Becker et al. (5). The level of mature calcitonin does not increase significantly during sepsis. The explanation for this has been proposed as a ‘shift of pathway’, from a ‘specific pathway’ (where calcitonin precursors are released in secretory granules with enzyme activity to process the precursors to mature calcitonin hormone) to a more ‘generalized pathway’ (where calcitonin precursors are ‘bulk released’ without secretory granules and thus without enzymatic activity to process peptides (5). Other calcitonin precursors are also up-regulated during bacterial infections; of these the mid-region, pro-adrenomedullin, has been established as a severity marker in sepsis (6).

In 1993, Assicot and colleagues described, that “serum concentrations of a substance immunologically identical to PCT, increase at the onset of infections” in a population of 79 children (7). This was the first systematic report of the possible qualities of PCT for infection diagnosis and severity assessment. Numerous clinical investigations regarding PCT have been published since then.

On this basis, PCT has been proposed to be a promising marker for diagnosis and monitoring of infections in critically ill patients (8).

PCT for diagnosis of sepsis and for excluding bacteraemia

Many studies have so far explored the diagnostic accuracy of PCT to diagnose sepsis in different populations and special attention has been drawn to critically ill patients. In summary, the results are very diverging, both regarding diagnostic sensitivity-specificity characteristics and regarding the optimal cut off. Prominent examples of such divergence are the studies by Ugarte et al. (9) and by Müller et al. (10). Both these studies describe critically ill patients suspected of sepsis and used the contemporary sepsis definition and PCT analysis. In the first, the diagnostic accuracy for the diagnosis of sepsis was barely better than tossing the coin (sensitivity: 68% and specificity of 72%) and the optimal cut off was 0.6 ng/mL. In the latter the performance was excellent (sensitivity: 89% and specificity of 94%) at a cut off of 1.0 ng/mL. Several meta-analyses of these accuracy studies have been performed (11,12). Among these, the study by Tang et al. deserves special attention (11). In this study, severe publication bias was detected using Funnel plots, and the authors found an interesting association: for every 40 patients decrease in sample size, the diagnostic odds ratio of PCT for sepsis diagnosis increased by 1.8. Not to go into much more details, the main conclusion regarding PCT for sepsis diagnosis, is that this is generally not a good idea. Many explanations for this lack of performance can be mentioned. The lack of a robust gold standard for the sepsis diagnosis, and along this line, a profound lack of general consensus on sepsis diagnoses (13) are probably important, but also issues like insufficient blinding of PCT values to the clinical assessors and different pre-analytical and analytical issues can be contributing.

Only few clinical PCT studies have used a microbiological standard of serious infection, i.e., positive blood culture. The results from these studies, however, have been interesting. Among 165 febrile, hospitalized adult non-ICU patients admitted from the community, blood culture samples and PCT samples were drawn simultaneously (14). Single blood culture samples with typical contaminants where counted as “not positive”. Incubation was done in an automated and validated system (either “Bactec 9240” or “Vital”, Becton Dickinson). Using this method, a negative predictive value for of 98.8% was found for PCT measurements in predicting bacteraemia, using a cut off of 0.4 ng/mL. The corresponding sensitivities and specificities for bacteraemia at this cut off were 95.7% and 57.4%. The authors conclude that in community acquired infections when patients are febrile; PCT single values seem to be a secure way to rule out bacteraemia and possibly to optimize blood-culturing strategies. In another study of PCT and bacteraemia, Gaïni et al. (15) investigated 185 emergency department patients and found median PCT levels of 0.6 ng/mL in non-bacteremic patients and 14.1 ng/mL in bacteremic patients, P<0.0001. Interestingly, in an in vitro model with human adipocytes, where IL-1β was added with or without interferon γ evidence was found, that the pronounced and rapid IL-1β-initiated PCT response was blocked when interferon γ was added, as in viral infections (16). Thus, low PCT levels (below 0.4 ng/mL) seem to rule out current bacteraemia, and PCT levels seem to be substantially higher in an acutely admitted patient in the emergency department, who eventually has a positive blood culture. The clinical potential of this has been explored in large randomized trials (RCT), testing the clinical effect on one side, of initiating and escalating antibiotics in critically ill patients, and on the other side, in RCT’s testing the effects and safety of de-escalating and discontinuing antibiotics in patients from different settings.

The time to administration of adequate antibiotic treatment is a strong predictor of mortality in septic patients (17-19). In the intensive care unit (ICU), the measures to inform of whether the patient is improving clinically may be imprecise. Biomarkers like C-reactive protein (CRP) and white blood cells (WBC) are by many clinicians considered not sufficient to guide timely decision-making. Classical microbiological work-up is often of limited help because of low sensitivity and a considerable delay on final results. Thus, new biomarker methods are needed to improve the timing of initial antibiotics and of changes in antibiotics.

Observational studies have not answered the question of whether PCT-guided antibiotic initiation and escalation could improve the survival in septic critically ill patients. In the Procalcitonin And Survival Study (PASS), the objective was to find out whether PCT-guided initiation or escalation of antibiotics and other antimicrobial measures could improve survival by substantially reducing the time until adequate antibiotics were administered (20). The study was a 1,200-patient randomized controlled trial conducted in 9 ICUs across Denmark. In the active treatment group, an increasing PCT level led to empiric broadening of antibiotics according to a specified algorithm and prompted additional culture samples and radiological imaging of suspected infected foci (21). Although the adherence to the antimicrobial intervention algorithm was high (82%), the study intervention did not lead to a survival benefit. A possible reason for such a result is a “neutralizing” effect (harm from antibiotics and benefit from better antibiotic timing). Some important harm effects have been documented from the “high-intensive” antibiotic strategy in the PCT-guided arm of the study: a piperacillin-mediated increased risk of renal failure (22), a ciprofloxacin-associated increased risk of invasive fungal infection (23) and hematological side effects (24). Additionally, patients judged by clinicians as in high risk (severe sepsis or septic shock) in most cases were already covered with broad-spectrum antibiotics, and the potential to expand the spectrum was thus low and could not be expected to alter the prognosis. Thus, increasing PCT, in a critically ill sepsis population, should not, by itself, lead to antimicrobial escalation.

The World Health Organization (WHO) has stated that: “antibiotic resistance is one of the biggest threats to global health, food security, and development today” and “antibiotic resistance occurs naturally, but misuse of antibiotics in humans and animals is accelerating the process”. Thus, internationally, many initiatives have been made to reduce unnecessary antibiotic use and resistance.

PCT has been tested as a tool to discontinue antibiotics among patients with acute respiratory tract infections in settings and severities as different as primary care (25), emergency care (26,27), in patients with bacteremia (28) and intensive care (29,30). Through all these settings, it has been proved that the duration of antibiotic treatment can be reduced substantially when the adherence to the protocolized intervention is reasonable, and when serial measurements are performed. These studies, and other alike, have been summarized in a systematic review, in which the power was sufficient to explore mortality and antibiotic side effects (31). In this study, it was found that the defined side effects of antibiotics, were reduced from 22% to 16%, and surprisingly, mortality was reduced among the PCT-guided patients. Opposite, no obvious benefit regarding antibiotic reduction was found in a recent trial in patients recruited before admission to hospital for acute respiratory tract infection. PCT was used to assist in the decision to admit to hospital and, for those who were admitted (49.7% of patients), to guide the length of treatment. The reasons for this result can possibly be found in the mechanics of the trial: only half of the patients had serial measurements (those who got admitted), and even more importantly, the adherence to the protocol was as low as 30-45% among patients with low PCT (i.e., prompting antibiotic discontinuation)—in other words: if PCT-measurements are not followed by an adequate reaction, the strategy may prove less effective.

In conclusion regarding biomarker-assisted management of acute respiratory tract infections, PCT is an evidence-based and documented safe method of substantially reducing unnecessary use of antibiotics among hospitalized patients with acute respiratory tract infections. A large body of evidence supports this in patients admitted with community-acquired pneumonia and COPD exacerbations as well as in septic critically ill patients. Such a strategy seems particularly successful, if PCT measurements are done at admission and for every approx; 24–48 hours, but only if there is a relevant degree of adherence to the PCT algorithm. An example of such a discontinuation algorithm is displayed in Figure 2.

PCT-guided antibiotic therapy has been shown to safely reduce unnecessary administration of antibiotic treatment among hospitalized patients with acute respiratory infections. Also, PCT single values seem to be a secure way to rule out bacteremia and possibly to optimize blood-culturing strategies. However, increasing PCT should not lead to antimicrobial escalation and the use of PCT to assist in sepsis diagnosis cannot be routinely recommended. Table 1 summarizes key messages.