Routine coagulation assays such as activated partial thromboplastin time (APTT) and prothrombin time (PT) have traditionally been used in clinical practice to screen for coagulation disorders particularly as part of preoperative work-up despite the limited use in detecting bleeding and thrombotic disorders (1). APTT and PT were developed primarily to monitor anticoagulant effect and only measure time to clot formation—it is known that only 5% of the overall thrombin generated is assessed with the routine coagulation assays (2). Recent development has seen global coagulation assays such as viscoelastic testing and thrombin generation being proposed, in concert with traditional clot-based assays, to assess a patient’s overall haemostatic profile. Currently, viscoelastic testing such as thromboelastography are increasingly used to guide individualised transfusion in massive transfusion protocols (3). In this case report, we present a case of an isolated prolonged APTT not fully explained by routine coagulation testing. By utilising the traditional clot assays together with global coagulation assays, we assessed the patient’s risk of bleeding and made recommendations for a major abdominal surgery. All procedures performed in studies involving human participants were in accordance with the ethical standards of the institutional and/or national research committee(s) and with the Helsinki Declaration (as revised in 2013). Written informed consent was obtained from the patient. We present the following case in accordance with the CARE reporting checklist (available at http://dx.doi.org/10.21037/jlpm-20-95).

A 71-year-old man with pancolitis in the setting of severe Crohn’s Disease was referred to our Haematology unit for investigation of isolated prolonged APTT, noted in the setting of preoperative work-up for Category 1 elective laparoscopic proctocolectomy with ventral parastomal hernia repair. His other past medical history was remarkable for osteopenia, latent tuberculosis and Guillain-Barre syndrome. His past surgical history included a laparoscopic high anterior resection and loop ileostomy for colonic stricture 12 months prior with no clinically significant bleeding complications as well as previous endoscopies with biopsies. Apart from multiple episodes of gastrointestinal bleeding in the setting of Crohn’s flare including an episode requiring blood transfusion and iron infusion, there were no other significant personal or family history of bleeding diathesis or thrombosis.

Due to the prolongation of the APTT, a mixing test (immediate and 1 hour 37 °C) was performed which resulted in a full correction when mixed 1:1 with normal pooled plasma indicating a factor deficiency. Intrinsic factor studies (Factors VIII, IX, XI and XII) were performed of which there were within normal reference range apart from an elevated factor VIII level in the setting of mildly increased C-reactive protein consistent with mild inflammation. Lupus anticoagulant screen [Cephen LS APTT, STA-Staclot dRVV and STACLOT-LA (Hexagonal), Diagnostica Stago], anti-beta2 glycoprotein I and anti-cardiolipin test were all negative. Given the normal intrinsic factor studies, contact factor deficiencies were considered. To screen for contact factors such as high molecular weight kininogens (HMWK) and pre-kallikrein, a short and prolonged pre-incubation was performed on the Triniclot-S APTT assay (4).There was correction from 58.9 seconds (2 minutes) to 39.8 seconds (20 minutes) indicating a possible pre-kallikrein deficiency. Subsequent testing, however, revealed a normal pre-kallikrein level of 92%. We also employed the use of different RCPA-accredited laboratories and APTT reagents and found that with Synthasil, the APTT was normal on immediate testing and prolonged incubation. The APTT remained prolonged with Actin-FSL and APTT-SP (a lupus-sensitive APTT reagent with ellagic acid as activator). 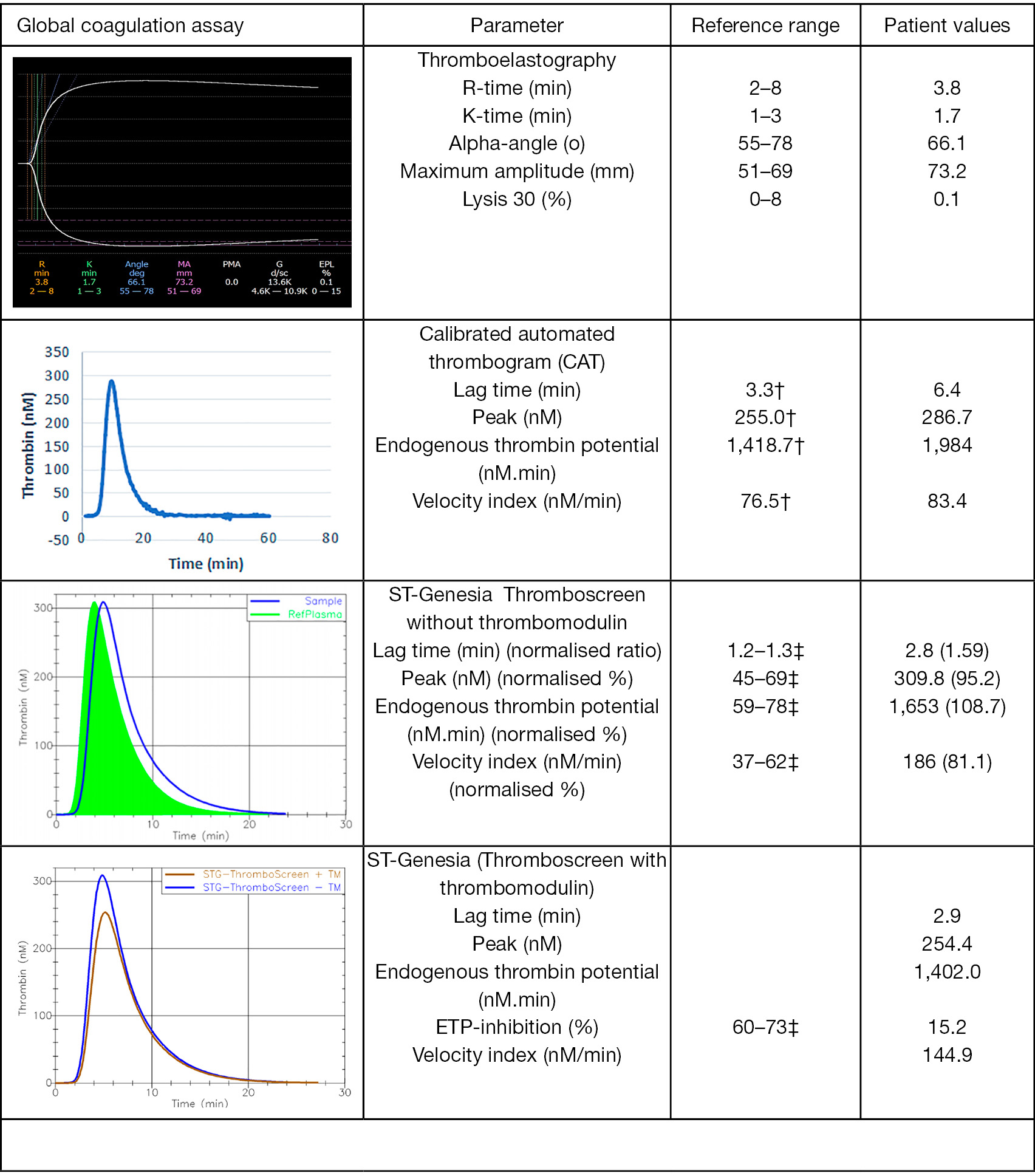 Figure 1 The global coagulation traces for the patient which appear more hypercoagulable than corresponding control or reference plasma. †, these values were that of the control reference plasma. ‡, ST-Genesia reference ranges for normalised ratio were adapted from the published study by Calzavarini et al. using 123 normal controls and the reference ranges quoted were those for men ages 50–80 years (5).

As there was no evidence of coagulopathy on the various assays, the patient underwent surgery with no blood product transfusion or factor replacement. There were no bleeding or thrombotic complications with minimal surgical blood loss and the patient had an unremarkable recovery. The patient also received pharmacological prophylaxis for venous thromboembolism prevention.

Prolonged APTT is a relatively common occurrence in laboratories and some of the common causes of an isolated prolonged APTT include anticoagulation effect, heparin contaminated samples, factor deficiencies and factor inhibition (5). Hence, it is important to investigate the cause of prolonged APTT due to the potential bleeding consequence, particularly in pre-operative setting. However, there are some cases where despite extensive testing for lupus anticoagulant, inhibitors and factor studies, no cause is identified (6). This case evaluates the role of global coagulation assays in assessing the safety of surgery in the setting of an unexplained prolonged APTT.

While the mixing study was suggestive of an intrinsic factor deficiency the intrinsic factors were within normal range. Further testing showed correction on extended incubation of APTT was strongly suggestive of pre-kallikrein deficiency (4) and again this was excluded with a normal pre-kallikrein level. Common pathway factor deficiencies were also excluded for completeness. Different APTT reagents were then employed and interestingly, the patient demonstrated normal or relatively less prolonged APTT using Synthasil and Actin FS respectively. This is likely due to the varying sensitivity of APTT reagents to deficiencies of clotting factors (7) even though in this case we did not prove a factor deficiency. The differences in factor responsiveness is attributable to the type of phospholipid and activator of the particular reagent as well as the specific concentration (7). Of note, both Synthasil and Actin FS are less sensitive to lupus inhibitor. We went on to exclude lupus anticoagulant despite the results of the mixing studies and this was, again, negative on two separate assays. However, we acknowledge that false negative lupus anticoagulant testing is possible given lupus anticoagulants are known to be a heterogeneous group of autoantibodies and a weaker lupus anticoagulant may be missed (8,9). In addition, C-reactive protein has been reported to result in prolongation of APTT particularly if silica is the activator (10) which may confound the results although we note that the patient’s C-reactive protein is only mildly elevated (12 mg/L) and hence is unlikely to cause the degree of APTT prolongation in this case. Furthermore, while infections can lead to endogenous heparin-like activity (11), this is unlikely given the results of the mixing study.

Results from the global coagulation assays showed some interesting findings. Even though the global coagulation assays are mainly studied for research purposes, literature has shown that it may be a useful tool in predicting haemorrhagic or thrombotic events (1,12,13). Interestingly, thromboelastography, performed on citrated whole blood and thus containing all cellular components of blood (as opposed to platelet poor plasma for other coagulation assays), demonstrated normal reaction time. In addition, the lag time which can be regarded as the time it takes for clot formation synonymous to an APTT (2), was normal as measured using ST Genesia ThromboScreen (medium concentration tissue factor) in contrast to the prolonged lag time measured using CAT (with 5 pM tissue factor). Prolonged lag time seen on CAT has been previously described in patients with antiphospholipid syndrome as the “lupus anticoagulant effect” due to possible delay in prothrombin conversion rate despite higher thrombin peak although we note that the lupus anticoagulant testing in this patient was negative on two occasions (14). The discrepant lag time between the two thrombin generation assays is unclear as the exact concentration of tissue factor and phospholipids of ST-Genesia was not disclosed by Stago. The other interesting finding was the increased ETP and reduced ETP-inhibition (15.15%) suggestive of a potential procoagulable state (15)—this finding was further supported by increases MA on TEG, a reflection of maximum clot strength which has been associated with hypercoagulability as well (1). Of note, MA is dependent on fibrinogen and the patient also had an elevated fibrinogen level which may have confounded the MA value. Overall, these findings deflected the clinical decision to use prophylactic fresh frozen plasma (FFP) as FFP may potentially further increase the risk of venous thromboembolism (16), compounding to the inherent risks already conferred by severe Crohn’s disease (17).

This case highlights a situation in which global coagulation assays can provide further reassurance to clinicians that the patient is unlikely to have an underlying bleeding phenotype despite the conundrum of not being able to conclusively diagnose a cause for the prolonged APTT through other more established and validated coagulation studies.

We wish to acknowledge the patient for consenting to the case report and the various laboratories who have performed the additional testing on the samples.

Reporting Checklist: The authors have completed the CARE reporting checklist. Available at http://dx.doi.org/10.21037/jlpm-20-95

Conflicts of Interest: All authors have completed the ICMJE uniform disclosure form (available at http://dx.doi.org/10.21037/jlpm-20-95). The authors have no conflicts of interest to declare.

Ethical Statement: The authors are accountable for all aspects of the work in ensuring that questions related to the accuracy or integrity of any part of the work are appropriately investigated and resolved. All procedures performed in studies involving human participants were in accordance with the ethical standards of the institutional and/or national research committee(s) and with the Helsinki Declaration (as revised in 2013). Written informed consent was obtained from the patient.

Open Access Statement: This is an Open Access article distributed in accordance with the Creative Commons Attribution-NonCommercial-NoDerivs 4.0 International License (CC BY-NC-ND 4.0), which permits the non-commercial replication and distribution of the article with the strict proviso that no changes or edits are made and the original work is properly cited (including links to both the formal publication through the relevant DOI and the license). See: https://creativecommons.org/licenses/by-nc-nd/4.0/.